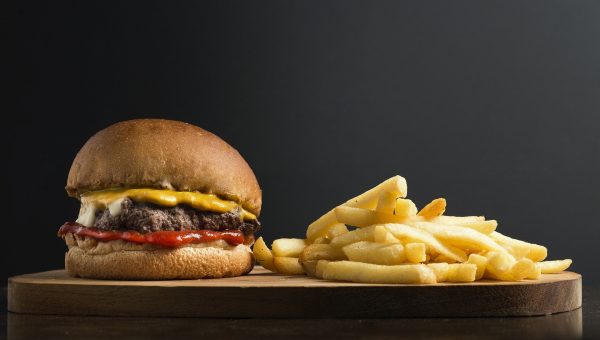 Congratulations to Dr. David Labbé and colleagues for their paper published in Nature Communications: High-fat diet fuels prostate cancer progression by rewiring the metabolome and amplifying the MYC program

This article was originally published on the RI-MUHC website and on Med e-News.

What molecular event happens for prostate cancer to progress faster and to be deadlier when patients eat a high-fat diet? This is the question Dr. David P. Labbé, a scientist at the Research Institute of the McGill University Health Centre (RI-MUHC), and his colleagues recently elucidated. In a study published in Nature Communications, they showed that saturated fat intake induces a cellular reprogramming that is associated with prostate cancer progression and lethality. These findings could have a clinical utility in identifying patients at higher risk of a more aggressive, lethal disease. In addition, they suggest that dietary intervention involving the reduction of animal fat, and specifically saturated fat consumption in men with early-stage prostate cancer, could possibly diminish or delay the risk of disease progression.

Some genes – called oncogenes – play a role in cancer initiation and progression. MYC is one of those.

“In this paper, we showed that by mimicking a MYC overexpression, saturated fat intake makes prostate cancer worse,” says Dr. Labbé, who started this study at the Dana-Farber Cancer Institute in the United States, under the supervision of Dr. Myles A. Brown, Director of the Center for Functional Cancer Epigenetics and Emil Frei III Professor of Medicine at Harvard Medical School.

“MYC overexpression profoundly rewires cellular programs and bolsters a distinctive transcriptional signature. MYC is a key factor in tumorigenesis, i.e. it induces malignant properties in normal cells and fuels the growth of cancer cells,” adds Dr. Labbé, who is also assistant professor in the Department of Surgery, Division of Urology at McGill University.

Based on answers to validated food frequency questionnaires obtained from the Health Professionals Follow-Up Study and the Physician Health Study cohorts, researchers were able to stratify prostate cancer patients based on their fat intake – high-fat diet vs. low-fat diet – and the type of fat they were eating – either saturated, monounsaturated or polyunsaturated fat. By integrating dietary and gene expression data from 319 patients, researchers discovered that animal fat and specifically saturated fat consumption mimicked a MYC overexpression. They validated their findings in vivo using a murine prostate cancer model.

Strikingly, patients who had the highest level of the saturated fat intake (SFI) MYC signature were four times more likely to die from prostate cancer, compared to patients with the lowest level, independently of the patient’s age or year at diagnosis. Even after adjusting the results for cancer Gleason grade – an indicator of the aggressiveness of the disease – this association remained significative.

Since fat consumption could be linked to an increase in body fat and obesity, and since obesity is also a risk factor associated with prostate cancer, Dr. Labbé used the Body Mass Index (BMI) to make sure that it was only saturated fat intake – and not obesity – that promoted the progression to a metastatic and lethal disease.

“Even after removing obesity from the equation, patients with high levels of the SFI-MYC signature are still three times more likely to die of prostate cancer,” says Dr. Labbé. “Epidemiological studies have previously reported that saturated fat intake is associated with prostate cancer progression. Our study provides a mechanistic underpinning to this link and a basis to develop clinical tools aimed at reducing the consumption of saturated fat and increasing the odds of surviving.”

The study also showed that for saturated fat to induce MYC reprogramming, the tissue needs to be transformed.

“In a prostate cancer patient, the prostate contains both tumour and normal tissue,” explains Dr. Labbé. “We showed that saturated fat intake only affects the transcriptional program in the tumour tissue.”

“Altogether, our findings suggest that a substantial subset of prostate cancer patients, including some without MYC amplification, may benefit from epigenetic therapies targeting MYC transcriptional activity or from dietary interventions targeting metabolic addictions regulated by MYC.”

Knowing the dietary pattern of a patient or his level of physical activity, clinicians could eventually suggest some specific intervention to decrease the likelihood of progression to a lethal disease. But in order to do that, more research is needed.

“The impact of diet on cancer development has been first established more than 100 years ago. However, lifestyle-related data is only sparsely collected among patients, thereby limiting our capacity to define the molecular link between lifestyle factors and cancer initiation, progression and lethality,” says Dr. Labbé. “We will start soon here at the RI-MUHC to gather dietary and physical activity and assess body fatness information from patients undergoing screening tests for different cancers. And with that data, combined with research in the laboratory, we hope to be able to build personalized interventions for patients who are more at risk of having their cancer progress rapidly, and to ultimately improve outcomes.”